The Sniders are a close-knit family. But the family bond grew even stronger when father and son, Mike and Kyle, both began performing at The Westmoreland Players.

Community theatre has long been a family affair. It’s the perfect environment for parents and offspring to play on the same field with the same rules. Director Nancy Royall cast real-life father and son, Mike and Kyle Snider, in that same relationship onstage in the Players’ upcoming production.

Enter Laughing by Joseph Stein opens its doors to audiences Saturday, February 24. Based on the autobiography of famed comedian/writer/director Carl Reiner, it’s a charming comedy great for the whole family to enjoy together.

Kyle Snider plays the leading role of a novice actor. In his early 20s, Kyle has a handful of shows under his belt. Treading the boards has given him a lot of stage savvy, but it’s his natural talent that will win you over as soon as the stage lights come up.

His Stratford Harbor neighbor, Marcia Fairman, an avid Players volunteer, told Kyle about the theatre. She said she could offer him a ride if he’d like to usher. He was personable, enjoyed greeting the patrons and handing out programs.

Artistic Directors Glenn and Joy Evans couldn’t help but notice Kyle’s shining personality and had a hunch he was stage worthy. He’s come a long way since first entering the theatre in 2014.

“Ever since I was a toddler, I’ve always loved to tell myself stories,” says Kyle. “But before joining the Players, I had never considered acting. It wasn’t until graduation, when I made a speech to a full audience, that I discovered I could be on stage without any stage fright. So when Glenn offered me a part, I thought, ‘Well, I’ve been on stage before and I didn’t have any trouble. Why not?’ That’s when I discovered that I had acting talent, and from there it was off to the races!”

Dad Mike recalls his own breakthrough moment. “My youngest son, Kyle, was invited to audition. I sat in and even read a part. I didn’t think I was ready to commit the necessary time, but it was already too late. I’d caught the ‘bug’ and couldn’t resist getting involved. I ended up running lights and then auditioned the following season.”

“I love being a part of something Kyle enjoys,” says Dad. “The fact that I get to share the stage with him is priceless. My favorite experience with the Players was getting to play Kyle’s brother in The Odd Couple – Female Version. 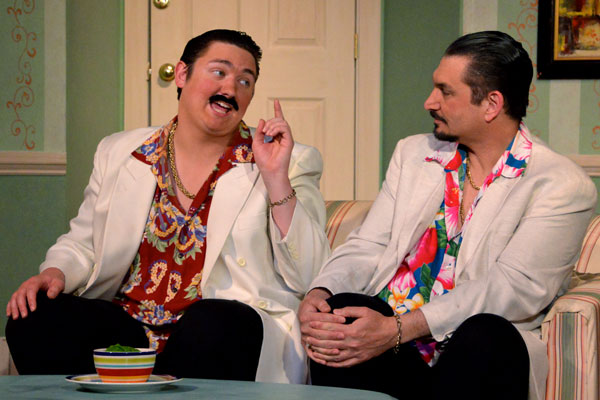 KYLE AND MIKE SNIDER as brothers in “The Odd Couple” at The Westmoreland Players.

Unlike life at home, in Enter Laughing, the two actors are in an adversarial relationship as father and son. Acting is all about playing emotions and situations that may not be like one’s own. So the duo happily pretend.

“Any opportunity to do something fun with my father is something I will always cherish. Working alongside somebody you’ve known your whole life allows you both to play off of each other in a way you just can’t do with someone else,” remarks Kyle.

Mike beams when he talks about his son. “I knew one of two things would happen when Kyle stepped onto the stage the first time; he’d either freeze up, or he’d be brilliant. I was pretty confident it would be the latter.”

As Technical Operations Manager for Fairfax County’s Department of Neighborhood and Community Services, Mike’s average commute to work is a four-hour round trip. Yet, he will cart the two of them to rehearsals from Stratford Harbor to Callao with a smile on his face.

“I don’t think I’d still be doing it if it wasn’t worth it,” Mike says with sincerity. “I love the people I get to work with, and I had forgotten how much I enjoyed being involved in theater, both onstage and off.”

“Solving technical problems gives me great pleasure.” And Mike willingly does a lot of that for the theatre, as well. “But there’s nothing like being up there onstage, and hearing that applause.”

“I love it when I can entertain people. When I’m part of a high-quality production, like those the Players put on, it makes me happy knowing audience members are enjoying themselves.”

You can catch Kyle and Mike Snider in the act in Enter Laughing running from February 24 to March 11, 2018. Without a doubt, you’ll leave laughing and smiling all the way home.