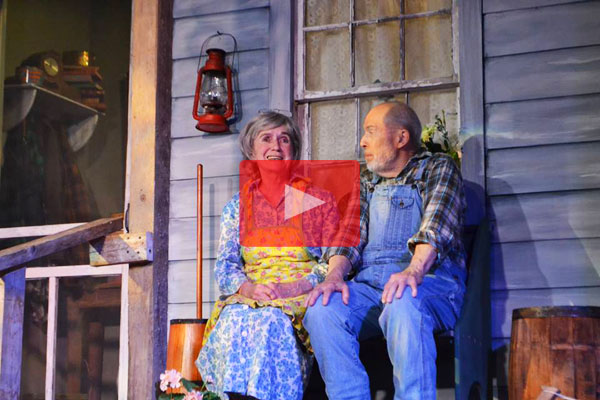 By Hume Cronyn and Susan Cooper

Annie Nations, an indomitable Appalachian widow of 79, lives on her mountain farm with the acerbic ghost of her husband Hector. Her tranquility is threatened by a brash real estate developer who wants to turn her land into a vacation resort and by concern over her son Dillard, a country singer who has come home with two stranded children because his wife has run away. Annie’s battle to decide her future takes her through some funny, touching, and magical flashbacks to her life with Hector. Played on Broadway by Hume Cronyn and Jessica Tandy, this couple offers a staunchly affirmative tribute to men and women of the country and their bond to the land of their fathers.

Athletes and dancers are in their prime in their teens and twenties.  By 30 they’re over the hill.  Even the business world focuses on the talents of technically savvy millennials.

But unlike other disciplines, the theatre offers unique opportunities for actors at any stage of life.

At 81,  Oscar-winning actress Glenda Jackson has just returned to a starring role on Broadway.  Donald Sutherland, a mere 82, takes on J. Paul Getty in the new TV series Trust. At 88 years young, Christopher Plummer it seems will never stop taking on challenges. And Estelle Parsons, now an incredibly youthful 90, put in a appearance in the revival of Roseanne. 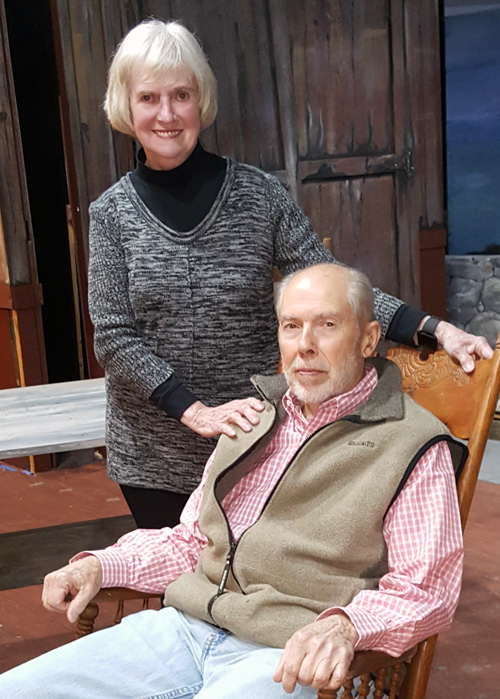 Reedville residents Sharon Robertson (79) and Robert Wilson (80) are treasured seasoned actors at the Westmoreland Players.  Audiences at the Callao theatre have been privileged to enjoy their talents in dozens of performances over the last couple of decades.

Currently Sharon and Bob take on the two leading roles of husband and wife in Foxfire by Susan Cooper and Hume Cronyn. It’s the heartwarming story of a woman living on an isolated mountain top in the Appalachians. The character of Annie wrestles with the choice of staying put or leaving for her own good and that of her family.

I asked these veteran actors why they continue to choose performing at this time in their lives. “When I was a ‘young’ woman of 30 or so,’ Sharon says with a smile, “I had a role where I wore a bikini with fishnet hose. When the show was over my four children ran backstage. My 10 year old, wrapped her arms around me and said, ‘Oh Momma, I am so proud of you.’ I guess that is probably the biggest reason I act still – to make my family and friends proud of me and to feel that pride in myself for a job well done.”

“After multiple ‘final’ performances, I still have difficulty refusing a good role,” Bob confesses.  “An important reason for continuing to perform at my age is the mental exercise I get from learning and interpreting lines and interacting with others in the company to create a meaningful experience for the audience.”

Without a doubt, both actors face new challenges in performing.  However, unlike many who bring their personal dramas to rehearsal, these two never complain.  They are always early to rehearsals and well prepared.

“At this point in my long life, memorization is more difficult,” admits Sharon, who has the most dialogue in this play. “I have to depend on ‘muscle memory’ a lot, doing my lines, over and over and over. Arthritis in my fingers makes handling some props more difficult and I’ve instability walking because of knee replacements.”

Bob also agrees that learning lines takes more time than it did ten years ago. “As my hearing continues to degrade, my biggest concern is missing a cue and creating a problem for other actors.”

He notes that, “Doing a show carves out a significant amount of time, forcing decisions on what gets deferred.  At my age, time is becoming increasingly precious.”

Yet there is no denying the contribution theatre makes to his life.  “It gives me the opportunity to work with intelligent, thoughtful, creative people of all ages and backgrounds enriching the tapestry of my life.”

Sharon shares how her theatre career blossomed. “I first began in theatre by playing a baby doll in first grade…in a short frilly pink dress with frilly pink panties.  All the little boys laughed because they could see my panties. I hated that laughter then. Now, if I can get people to laugh, I am joyful.”

Bob‘s theatrical debut was a bit later in life. “My high school speech teacher started a Drama Club. Our one-act play was selected to go to the state drama contest, but  trip was cancelled because of a snow storm.  Our teacher wrangled an invitation for us to do a guest performance in Louisville…and to take a side trip the show Tea and Sympathy with Deborah Kerr.  It was the first professional show any of us had ever seen.  Afterwards we went backstage.  On the ride home, I told my teacher that I bet I could do that,” recalls Bob.

“I wanted to go to college, but I had no idea what I wanted to do,” Bob adds. “My teacher gave me a copy of Theatre Arts magazine, and pointed to an ad for the Goodman Theatre of Chicago.  I figured I had nothing better to do.  I was accepted and headed for Chicago.  The following January, the first national company of  Inherit the Wind opened …which led me to an Equity (professional) contract and a 13-month tour.  I was very active in the theatre till I was 23, then I took a 45-year break to earn an living.  I discovered the Players in 2007.”

“I would have liked to play Willy Loman in Death of a Salesman, but I’m not disappointed it didn’t happen,” Bob states.  But who knows what iconic role is still in this actor’s future.

Sharon says she has no unfulfilled theatre dreams. “I feel I’ve been given the best roles a woman of my vintage could have. The highlight role was Maude in Harold and Maude. I was able to ‘let it all hang out.’”

Bob offers this thought to the younger generation. “My advice to any young person, not just those that would like to be actors, is get involved with a school or local theatre company. By volunteering to work on a show in any capacity, young people learn skills that will serve them well wherever their lives take them.  Taking responsibility for your part in making any project succeed, listening and being aware of what is happening around you, and understanding that you are one cog in a larger enterprise,” is what it’s all about.

“Children are not afraid to pretend and that is what we do when we act,” Sharon remarks  with a smile, “be a child again.” Now how many opportunities in life can offer you that miracle.

Join these two gems and the rest of the wonderful cast of the family drama, Foxfire, runningMay 5-20 at The Players, 16217 Richmond Rd., Callao.  Call 529-9345 or visitwww.westmorelandplayers.org for reservations.