I am a Camera

By John Van Druten
Winner of the Critics’ Circle Award

Directed by Glenn and Joy Evans

Say “Cabaret” and the smash hit musical immediately comes to mind. But the iconic character of Sally Bowles first dazzled audiences in John Van Druten’s play “I Am a Camera.” A society in decay, 1930’s Berlin swirls around an array of diverse citizens. Enter one “divinely decadent” Sally, a young Englishwoman who sings in the local cabaret, and her coterie of admirers…the caring landlady, Fraulein Schneider; Natalia, the Jewish heiress; Fritz, the gigolo with a secret; Clive the happy-go-lucky millionaire American tourist; and an unexpected arrival from Sally’s prim and proper mother, all add to the intriguing snapshot of this moment in history. The action is seen through the eyes of writer Christopher Isherwood, and captured through the lens of his camera, in this semi-autobiographical drama as oppression ominously looms on the horizon. 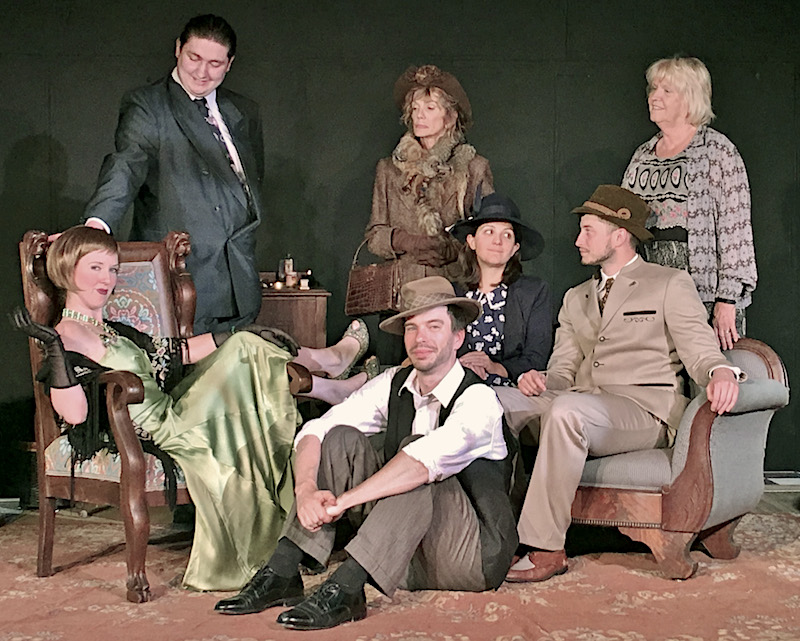 The cast of “I Am a Camera” pause to reflect on their passion for theater. Standing Kyle Snider, Kathryn Shepherd, Anita Harrower; (sitting) Deanna Lavery, Chad Lewis (on floor), Carolyn Reiner and Brett Hermance.

Your life is very busy. You’re swamped at work. And there’s always something to take care of on the home front — never mind your personal life. Why in the world would you want to spend your free time INDOORS? Especially during the summer!

Ask that question to any of the dedicated volunteer actors of the current cast of the Westmoreland Players in Callao and you’ll virtually get the same answer.

Now in rehearsal, I Am A Camera, by John Van Druten and directed by Glenn and Joy Evans, opens August 5 and runs through August 20th. The talented ensemble has been at it for weeks. Countless hours have been spent analyzing the script, learning lines and blocking, discovering just who their characters are and what makes them tick. Yet any serious actor will be quick to tell you the last phase of rehearsal is by far the most challenging.

“Directors,” so say the Evans team, “guide the production from day one. But creating the play’s dynamics and giving life to the action is the most demanding work.”

Theatre is at its core, play. However, it takes scads of hours of thoughtful preparation to create a role fully. After all is said and done, the actor’s goal is to offer audiences a memorable experience through the reality of their performance.

So why put yourself through all the hard labor and inevitable frustration? Why give up that valuable vacation time? Because the cast says it’s worth every minute they donate.

“Ever since singing a solo at church when I was three years old I have always loved to be onstage,” says veteran performer Anita Harrower. “Whether it is singing or acting or a combination of both I get such pleasure out of entertaining.”

“I think actors and playwrights are more important than ever,” Kathryn Shepherd tells us. A senior docent at the Supreme Court, she values the skills of communication. “Actors are in the present moment, witnesses of the truth and healers of society. Being in the moment is why I do theater. It is also the challenge of theater to be in that moment.”

Now treading the boards three years and counting, Player Kyle Snider offers a big smile and is quick to share with others that “the experience has been extraordinary! We’re more than just an acting troupe, we’re something of a family.”

Another member of that family, Carolyn Reiner tells us that “acting with the Players is a lot of fun but a lot of work. It’s all worth it on opening night. Getting to play pretend with my friends is the best part.”

Actor Brett Hermance treks nearly two hours one way just to be in a show. “I do theatre because the feeling of connecting with the audience is electrifying. There’s truly nothing else like it. I’ve grown to appreciate all of the immense work that goes into performance which has brought me a new level of joy. Completely losing myself in character while on stage has been remarkable. Theatre has brought wonderful people into my life and experiences like no other.”

An active Player for over a decade, Deanna Lavery sees theater as an important tool in her life. “As a counselor and therapist who works with individuals who have experienced trauma, theater is my emotional and expressive outlet!”, she offers with great enthusiasm. “As one might imagine, there are tough days but I am almost always able to leave that powerful energy on the stage. Though it is challenging to come to the theater after a long day of difficult work, it is always worth it! And playing dress up is an added bonus!”